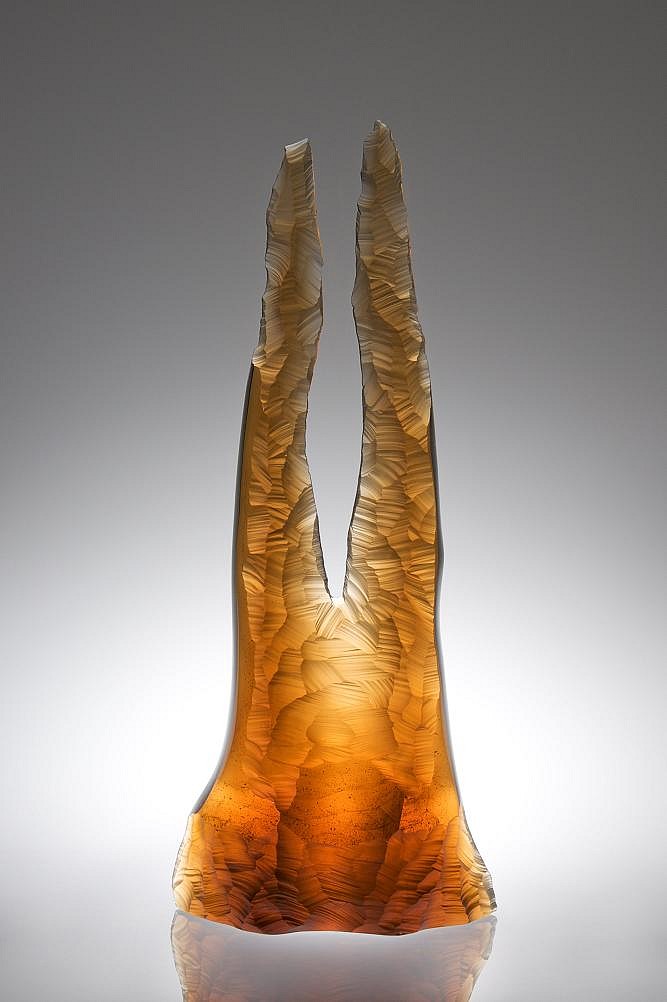 Dutch artist Peter Bremers was born in 1957 in Maastricht, where he studied sculpture at the University of Fine Arts from 1976 to 1980 and three-dimensional design at the Jan van Eyck Academie from 1986 to 1988. Searching for suitable ways of realising his artistic ideas, he at first worked with a wide range of materials, including glass, plastic, steel and stone. In 1989 he attended a course given by Lino Tagliapietra at the Gerrit Rietveld Academie in Amsterdam, but the strongest impetus to turn to glass as his ideal material had come three years earlier, during a workshop held at the Jan van Eyck Academie by the senior Dutch glass artist A.D. Copier (1901-1991). Bremers works together with a team of assistants who carry out ideas at the furnace that the artist has acquired in his extensive travels in Asia, New Zealand, Africa and the Antarctic. Among Bremers's most compelling work to date is his recent series Icebergs & Paraphernalia. In a DVD documentation of this series he describes his journey to the Antarctic in a deep-sea sailing ship, recording his impressions of the glaciers and of the waves glistening in the dawn sunlight. He also tells of disastrous attempts to realise the resulting ideas at the furnace, and how he travelled to the Czech village of Pelechov, near Zelezny Brod, to have them cast instead. In Icebergs & Paraphernalia Bremers uses undulating wave-like shapes, along with angular holes and arches to evoke a combination of ice and fire, light and colour. He recreates in glass the openings and fissures in the glaciers, together with the unfathomable depths of the ice. Bremers's work is featured in the public collections of Boymans van Beuningen Museum in Rotterdam, The Netherlands; Gemeentemuseum in The Hague, The Netherlands and National Glassmuseum in Leerdam, The Netherlands